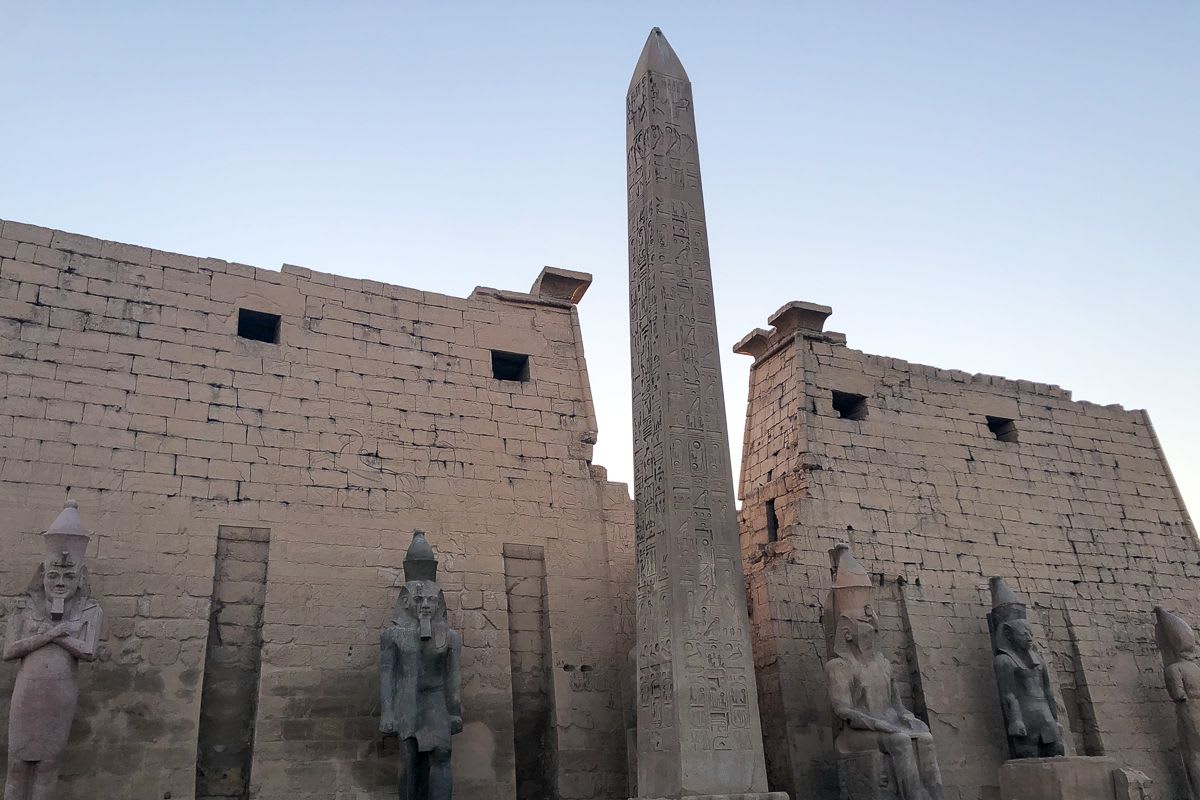 Luxor is one of the best open-air museums in the world with so many unique archeological sites to explore. Originally known as Thebes, Luxor was the capital of ancient Egypt during parts of the Middle Kingdom (2030-1650 BC) and New Kingdom (1550-1070 BC).

Experience the wonder of this ancient city by descending into painted rock cut tombs in the Valley of the Kings, walking through the Great Hypostyle Hall of Karnak Temple, and soaring high above the Nile River in a hot air balloon!

Brad and I spent three days in Luxor during our two-week backpacking trip to Egypt in January 2021. To learn more about our experience traveling during COVID-19 check out this post.

With so many possible activities it can be hard to narrow down what to do! Below I've ranked my top 10 attractions in Luxor. Check out my other posts on Cairo and Sharm El Sheikh to learn more about our travels in Egypt.

Known as the religious capital of ancient Egypt, Luxor is separated into the east and west banks of the Nile River. The east bank (sunrise) signified life and rebirth as seen in structures such as Karnak Temple dedicated in part to the sun god Amun-Re. Whereas the west bank (sunset) signified death and elaborate rock cut tombs were constructed as a final resting place to safely journey to the afterlife.

Begin your visit to Luxor with a sunrise hot air balloon ride to view the east and west banks in all of their glory! We booked with Hod-Hod Soliman and got picked up at our hotel at 5:00 AM before crossing the Nile River in a motorboat to standby while the hot air balloons prepared for takeoff.

Lifting off into the air was pure magic! Watching the rising sun illuminate the lush sugarcane fields covered in fog and marveling at the numerous temples below was an unforgettable bucket list experience.

TIP: Hop into one of the basket corners to get a great spot away from the intense heat of the burners.

Prepare to be in awe as you enter the complex of Karnak Temple through the Avenue of Sphinxes, which once connected all the way to Luxor Temple. A project is currently underway to fully restore the 1.7 mi avenue. Several pharaohs contributed to the construction of the temple from the Middle Kingdom up until the Ptolemaic Period (332-30 BC).

Here you will find the tallest surviving ancient obelisk in the world commissioned by Hatshepsut. The Great Hypostyle Hall is an engineering marvel with 134 columns in 16 rows representing papyrus. Some of the carved hieroglyphics still have original paint!

#3 Valley of the Kings

In 1922, Howard Carter and his team discovered the small tomb of boy-king Tutankhamun filled with a plethora of treasures. Although the artifacts are now on display in the Egyptian Museum and Grand Egyptian Museum (opening 2021), visitors can step inside to admire the colorful walls depicting scenes from the Book of the Dead and view his mummy.

Based on the recommendations of our tour guide, we explored the rock cut tombs of Rameses IX (KV 6), Merenptah (KV 8), Rameses III (KV 11), and Rameses V/VI (KV 9). A tomb was constructed up until the pharaoh's death and no expense was spared. The elaborate craftsmanship of this impressive necropolis is extraordinary!

TIP: Only a select amount of tombs are open at a time so trust your guide to know which ones to visit. Check out this helpful post by Earth Trekkers for more information.

Pharaohs wanted to leave a lasting legacy and invested a great deal of time constructing temples. These symbolic structures were often dedicated to the gods, but Luxor Temple breaks this tradition. First commissioned in 1400 BC, by Amenhotep III, the purpose of the temple was the rejuvenation of kingship and a possible place of coronation.

Rameses II eventually completed the temple and made sure to leave his mark. Most of the large granite statues and hieroglyphics carved on the sandstone glorify his reign. Originally two granite obelisks flanked the entrance, but one was moved to Paris in 1833.

TIP: Touring at least one temple at night is a must do in Egypt! The architecture evokes an energetic quality and the statues take on a spooky appearance.

On the other side of the Valley of the Kings is a remarkable temple fit for an Egyptian queen. Commissioned during the Middle Kingdom, Hatsepshut's temple is composed of three colonnaded terraces connected by ramps which seem to progress into the surrounding limestone cliffs. The jaw-dropping entrance is sure to leave a lasting impression!

Although badly damaged by her successor, Thutmose III, colorful reliefs depicting her coronation and divine birth as the daughter of the god Amun-Re still survive. The Osirian statues of Hatshepsut show her wrapped in a mummification shroud while holding the crook and flail. Honoring the god Osiris in this way reinforced the importance of the afterlife.

Looking for a temple off the beaten path with more than 75,000 sq ft of hieroglyphics and reliefs? This site is sure to please with its vibrant blue paint, peristyle containing papyrus columns, and imposing pylons.

Dedicated to Rameses III, animated scenes depict his triumph over the Sea People and his strength as pharaoh. Don't forget to look up at the ceiling to see the ornately painted vultures as you make your way through the courtyards.

#7 Tombs of the Nobles

Pharaohs weren't the only ones who had impressive tombs made for their journey to the afterlife. The prominent Egyptian upperclass consisting of nobles, priests, merchants, soldiers, and officials often commissioned tombs of varying sizes with elaborate designs.

Beautiful scenes portray everyday life, livestock, and supplies needed for a prosperous afterlife. Offerings to Osiris are shown while hieroglyphics display spells from the Book of the Dead to guide the deceased. We purchased a combo ticket to include the tombs of Menna (TT 69), Nakht (TT 52), and Amenemopet (TT 41).

TIP: The more the merrier! I wish we would've bought more tickets to see additional tombs since some of them are on the small side.

A ticket is NOT required to see the gigantic twin sandstone statues of Amenhotep III which is worth a quick visit. Although badly damaged in an earthquake, the 60 ft high marvels still have impressive details. Weighing 720 tons each, the statues were originally placed at the entrance of the pharaoh's mortuary temple.

#9 Mortuary Temple of Seti I

Worthy of a look for its relief carvings is the Temple of Seti I. Even though the temple is in disarray, tourists can experience a peaceful visit since it is often overlooked. The peristyle has interesting columns and the side rooms warrant a peek inside. Roof access is available for adventure seekers!

Don't leave Egypt without an amazing souvenir! Luxor has a variety of alabaster workshops filled with unique items such as stone pyramids, canopic jars, and statues of the gods. Sharpen your bargaining skills and have fun hunting for the perfect keepsake.

Tripadvisor ranks Imhotep Alabaster Luxor as one of the top shops in Luxor. The store is beautiful and Mohamed, the owner, wasn't pushy at all during our visit. We left with a gorgeous stone replica of the Palette of Narmer, a basalt pyramid, and three statues of Sobek, Amen-Re, and Tefnut.

TIP: We were stopped at the airport and questioned by security due to the authentic look of the souvenirs. Luckily the receipt and business card of the shop helped us out of a stressful situation! Keep this in mind if you make a purchase.

We stayed at the Hilton Luxor Resort and Spa for two nights before boarding our cruise on the MS Sonesta St. George I. Staying right on the Nile River was AMAZING! Take a peaceful ride in a felucca, a traditional Egyptian boat with a canvas sail, to have a similar experience if you don't have a cruise planned.

The first day we explored on our own after our sunrise hot air balloon ride. We paid 200 LE ($12 USD) for a taxi to take us around the west bank for five hours. We stopped at the Antiquities Inspectorate ticket office before making our way to the Temple of Rameses III, Tombs of the Nobles, Temple of Seti I, and Imhotep Alabaster Luxor.

The second day we met up with our Memphis Tours guide who took us to Karnak Temple and Luxor Temple. The third day we explored the Valley of the Kings, Temple of Hatshepsut, and Colossi of Memnon. I would recommend spending at least two hours at the major attractions. Come early to beat the crowds!

Luxor was my favorite city in Egypt and I highly recommend squeezing in as many attractions as your feet will allow!